Our first visit to Portland

Despite having cancelled most of our spring/summer vacations we opted to keep this in tact and visit my brother and his wife in Vancouver, WA for the week leading up to the 4th of July.

END_OF_DOCUMENT_TOKEN_TO_BE_REPLACED

Biking the Saguaro National Park was beautiful! This is a bike ride (or drive) that I would recommend to anyone in the area. It’s beautiful and full of the famous Saguaro. Coming in at 8 miles with only 500 feet of elevation gain, biking the Cactus Forest loop through the Saguaro National Park is super casual. Towing Maxine and stopping to take a bunch of pictures took us an hour. You share the road with cars but we found everyone to be super respectful and slow. Everyone is there to slowly cruise through the beautiful park.

END_OF_DOCUMENT_TOKEN_TO_BE_REPLACED

Z, Maxine and I just rode or bikes from Santa Barbara to Dana point and we loved it! We camped a couple nights, stayed in a couple hotels and visited at least 10 playgrounds along the way. Please enjoy our montage video which is mostly Maxine enjoying herself during our stops. ^_^

Biking in Sedona is awesome

Since we are working on building our bicycle touring legs we figured it would be awesome to drive to Sedona, camp out for a night and then hit the road on our bikes!

We headed up on Friday toward a location we found where we could camp for the night. We found a free camping site near Sedona and setup camp just in time for it to get dark. The moon and stars don’t get any more clear then when you’re in the desert on a cloudless night. It was beautiful.

We’ve visited Sedona a few times to wander around town and hike some of the beautiful trails. Most recently we hiked the Brins Mesa trail just north of town so we are quite familiar with the amazing landscape Sedona has to offer for hikers and bikers. Although we haven’t ridden the mountain bike trails yet, once Maxine gets a little older we will surely tackle them!

This time we decided to park in town, ready our bikes and just ride around. Before we covered our first mile we managed to find breakfast at SaltRock Kitchen. Getting there was fun as it felt like we were biking down a 15% grade for a block. We paid for it after breakfast though!

After breakfast we decided to head out 179 south and go as far as we could comfortably make it. Riding around town Sedona doesn’t have bike lanes but the drivers there didn’t seem overly rushed in to running bikes over. After leaving town and getting on 179 you’re graced with a massive bike lane for miles. Alas, this is where I recognized that I’m not a Tour de France candidate. Towing Maxine’s iGo Weehoo Venture with her in it adds 60+ pounds to my ride. After going up a couple hills on 179 I now know how it feels to be a really large person attempting to exercise. We didn’t even make it 6 miles down 179 before I punked out and wanted to turn back. Despite how difficult the ride is, it sure was beautiful though! Here’s our whole route on MapMyFitness. All together we only rode 13.6 miles.

After writing this post I realized we didn’t take any pictures of the amazing scenery that is the reason most folks even visit Sedona so let me Google that for ya! It is extremely beautiful out there! Whether you want to sit around and eat, hike, or do any kind of biking, Sedona should be on your list of places to visit. It’s got our stamp of approval. 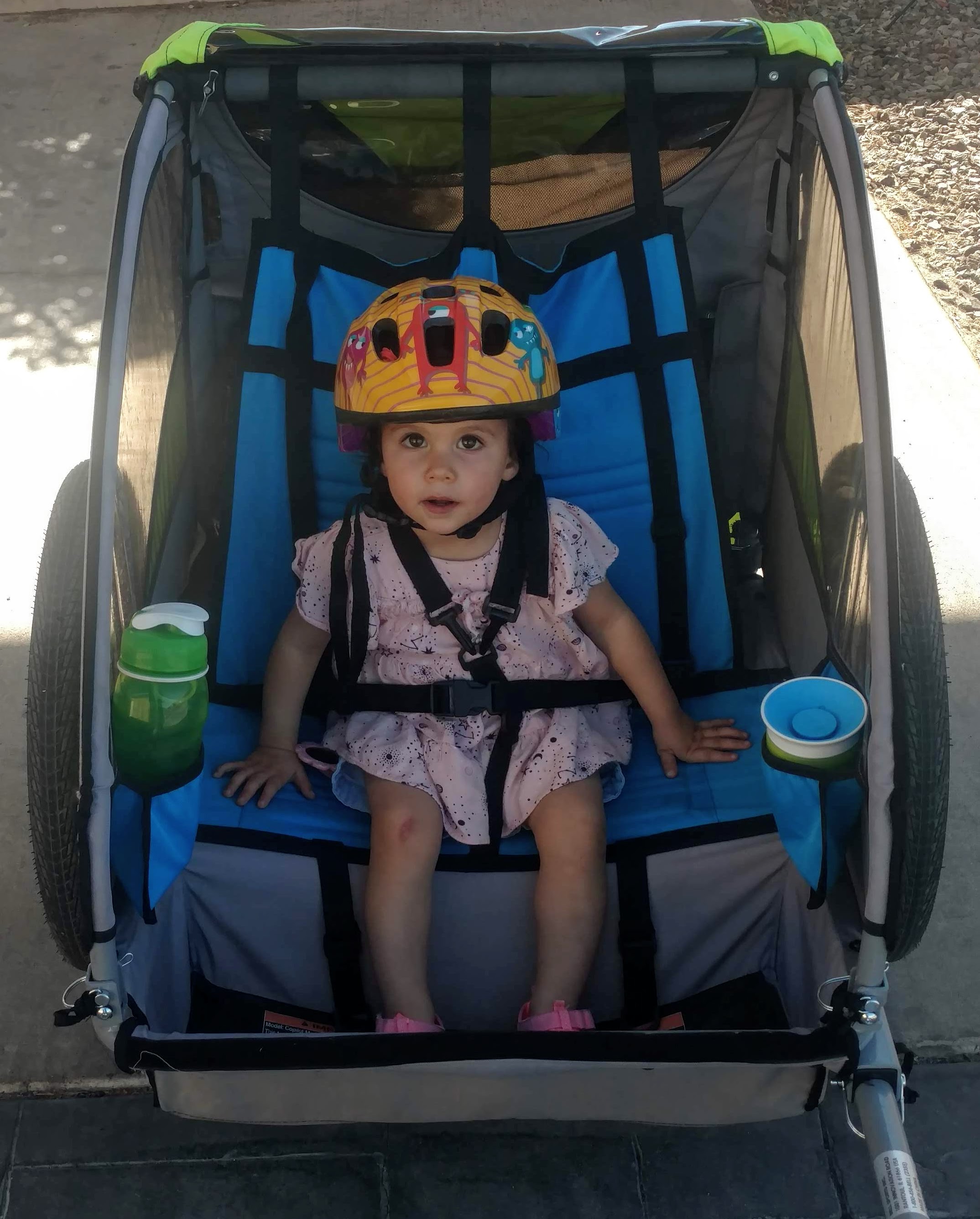 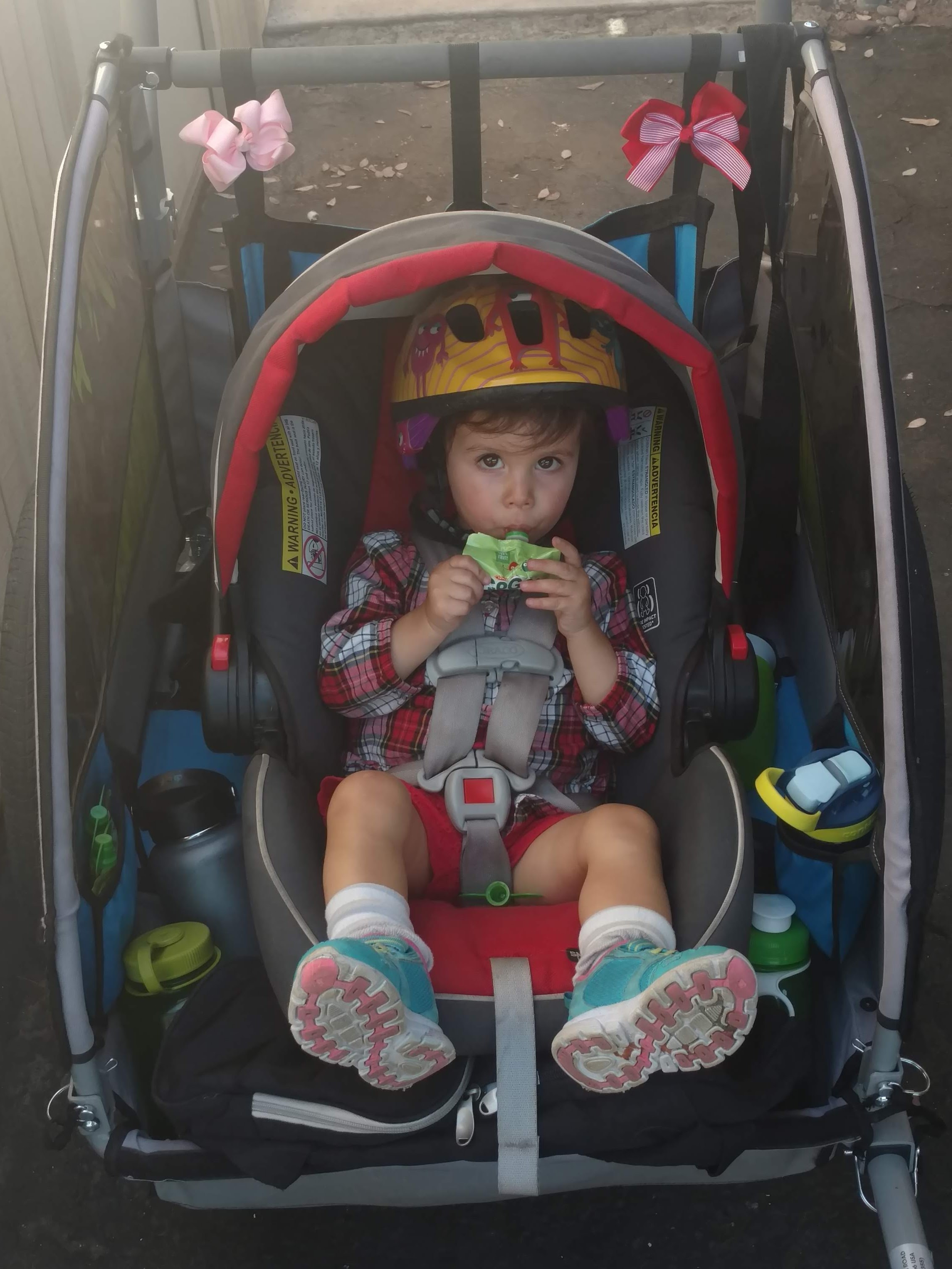