While moving to Greeley my Netgear WNDR3400v2 fell a part.  Being lazy I had super glued it to the inside leg of a metal desk I had and removing it with force didn’t work out so well so I borrowed an an old Belkin F5D7230-4 from my brother in law only to realize the firmware on it was horrid.  It only supported WEP encryption and you couldn’t even turn the wireless of.  It was a mess and rather than even wasting the time attempting to update the proprietary firmware I flashed it with DD-WRT firmware.  It took less than 5 minutes to get rolling with the DD-WRT Micro.  It was super simple to install from my Mac.  Here’s how I got it done:

Visisted the DD-WRT Router Database and searched for F5D7230-4 which pulled up a few items.  I found v1010 and downloaded the dd-wrt.v24-13064_VINT_micro.bin firmware to my ~/Downloads folder.

Plugged my Macbook directly in to a lan port on the Belkin & opened network settings: disabled Wi-Fi and set the Ethernet connection (Thunderbolt Ethernet) to a manual IP address of 192.168.2.2 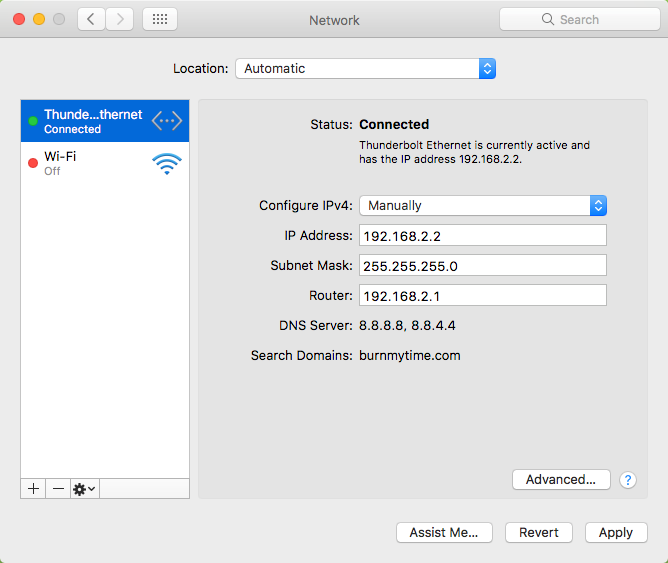 Open a terminal window and cd to my ~/Downloads folder where the dd-wrt.v24-13064_VINT_micro.bin file was stored and typed

to start up the tfpt console.

I copied the following in to my paste buffer and unplugged the power from the Belkin router.

About 1 second after I plugged the power back in to the Belkin router I pasted the content above in to the tftp console and was rewarded with the following message:  Sent 1740800 bytes in 1.6 seconds. Done!

About a minute later I changed my network settings back to DHCP and acquired the address provided by the Belkin router.  I navigated to http://192.168.1.1 and setup the login credentials for DD-WRT.   All in all it took less time to setup then it did to write this post. =)

I found the generic TFTP Flash Guide and the Belkin F5D7230-4 TFTP Flashing guide, both from DD-WRT to be handy.